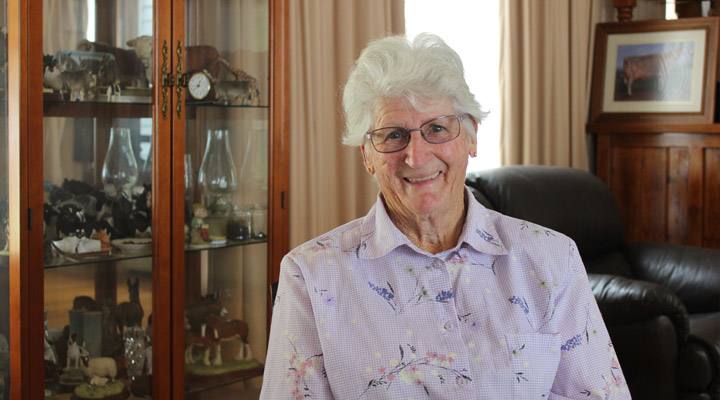 Winnie Oslear grew up in a different world of dairy farming.

Her first taste of the industry was hand-milking cows on her family farm at Meryla, south of Moss Vale, before she’d turned five years old.

Now as she nears her 75th birthday, Winnie is sharing the secrets of her endurance and resilience to inspire a new generation of farmers as part of an Australian Dairy Elders panel at the Australian Dairy Conference in Canberra on Thursday.

The prospect of addressing a sold-out audience at a national conference has Winnie a little nervous, but she believes younger farmers can learn a lot from those who’ve lived through decades of challenges.

“I never dreamt of anything like this happening; but I think it’s good thing to help young people,” she said.

Winnie and her son Shane gave up milking nearly three years ago but remain active in the industry breeding and showing stud Jerseys, and raising and selling heifers.

The dairy connection goes back to Winnie’s great-grandparents and Shane also works in the industry.

“I might be retired from milking cows but not the rest of it,” Winnie said.

“I do most of the calf rearing because Shane’s away during the week. We’ve probably got about 80 head in the herd at the moment.”

While this will be her first address at a national conference, Winne’s not new to talking about the dairy industry.

“When I was dairying, I used to go to the high schools so children could learn about it and if kids were interested, I’d take them for a week’s work experience,” she said.

“A lot of kids didn’t even know where milk comes from.”

“When you work on a farm you get an insight that other people don’t see.”

At the conference, Winnie plans to tell younger farmers to stick at it if they can, advocate for higher prices and keep their farming simple.

She says hands-on learning gave her a good grounding and when she separated from her husband 32 years ago, she was ready to take on the challenge of running the farm herself.

“I never went to school; it would have been a three-hour trip each way on the horse and sulky so we just did correspondence school for a few years and that was it. We lived way out of town, there was no power and I used to milk cows by hand before I was five.

“Technology has made it easier in a way but people have lost some of the hands-on skills. It’s all changed but not always for the better. You need a certain amount of technology but I think you need hands-on skills also.”

Winnie and Shane’s Cedar Vale Jerseys has won championships at the Royal Sydney Show, and many of their sold cows have gone on to win major titles.

“Caring for cows is one of the joys of farming,” she said.

“I feel so much for those in the recent Queensland floods. Our cows are part of the family.”

Despite her concerns about the future of farming, Winnie loves living on the land and she’s proud to see more women being recognised for their contribution to the industry.

“We’re at Moss Vale on a leased farm at the moment. When it sells, we’ll go back to the coast to Gerringong but we’ll continue doing what we do,” she said.

“I love it; you do it all your life and it’s part of you. I could be retired but what would I do?”