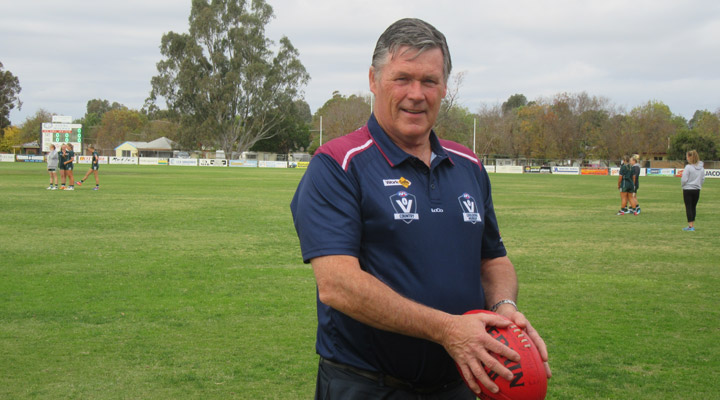 Chasing a golden era for footy and farming

In 1970 an old farmer told Chris Thomas that the golden era of dairy was just about to start.

Chris was just 16 at the time and had his mind firmly set on becoming a dairy farmer.

“I’d come home from school as soon as I could – all I wanted to do was farm,” he said.

A serious car accident the following year put paid to that plan, derailing Chris’ farming aspirations and football playing - but it never stopped him from making a huge contribution to both passions.

“I’m a bit like that old farmer, always thinking there are good things ahead,” he reflects.

Today, Chris is a board member of Murray Dairy, Dairy Australia’s regional development program supporting local dairy farmers. He is also an AFL regional commissioner, chairman of the Northern Country Women’s League and coach of the Echuca youth girls team.

The accident left Chris with serious leg, chest and head injuries. Unable to play football for two years, Chris focussed on how he could contribute to football and farm businesses in other ways.

“When I got back playing, I put my energies into learning as much as I could while working under good coaches so I could give back to football,” he said.

He also turned to study. Among his many qualifications, Chris gained his Masters of Applied Science (Rural Regional Development) and his Masters of Corporate Leadership.

Originally from South Australia, Chris moved to Victoria 20 years ago, working for dairy production companies before starting his own consultancy business, specialising in people development.

He applies that same attitude about giving back to football to his consultancy, regularly assisting dairy businesses.

His passion for regional development prompted Chris to join Murray Dairy as a director, more than two years ago, following an earlier role as a founding director for DairySA.

“Dairy is ever changing but there’s always such great resilience shown that the industry as a whole seems to continue maturing all the time,” he said.

“I think the industry has a big future. We’ve had to become more mature in growing our farms as businesses, not just for the love of dairying but to cope with volatile economic times and markets, and I want to contribute to that growth.”

He’s just as optimistic about the future of regional footy.

The launch of the Northern Country Women’s Football League lured him back with an invitation to become chairman, and three weeks later he responded to a SOS from the local Echuca team, which was on the brink of folding with no coach and players leaving. Chris thought “that’s not going to happen” and took on the role to rebuild the team, setting up a management structure to ensure it wouldn’t be threatened again.

Now in his second year as coach, he recently added the AFL Goulburn Murray commissioner role to his resume.

Most of his work for football has been in junior development and recently in advancing female football. While he was president of the Shepparton junior league a competition was created for under 18 girls. “We started with four teams and have now grown to 11 teams, which I’m thrilled to bits about,” he said.

Chris embraces the “new energy” women’s footy has brought to the game, which has added a boost to membership of country clubs. “It’s the fastest growing sport in Australia,” he said.

His positivity flows over to junior football.

“Football is the fabric of rural communities. Throughout all those droughts and upheavals and challenges we’ve always had footy on the weekend to go to. The parents of the juniors can be from all walks of life, standing as one. It’s a fantastic way to get involved in a positive community activity.”